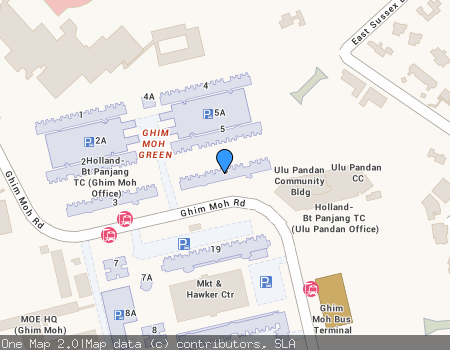 This is a historical snapshot of this listing. Please proceed to www.srx.com.sg to retrieve the latest listings.

There were a few schools located within the estate, Ghim Moh Primary School, which has merged with New Town Primary in 2008 and Ghim Moh Secondary School, which has also merged with Jin Tai Secondary School to form Clementi Woods Secondary School since 2007. In addition, Raffles Junior College was located right next to Ghim Moh (Mount Sinai) from 1984 to 2004. The campus is still around and had housed Dunman High School from 2007 to 2008. Up until December 2015, it houses Raffles Girls Primary School as it undergoes upgrading at its previous premises. From 2017 to 2019, it will host the newly formed Eunoia Junior College.[1]
The Ulu Pandan Community Centre is also located within the estate. Ghim Moh estate also includes a wet market and a food centre. There are also several coffee shops (as locally known, including 'Kopitiam'), salons, dental clinics and medical clinics located within the estate.
It is near to Ministry of Education Headquarters, Fusionopolis, Rochester Park and Biopolis, where many of the life-science businesses are located.