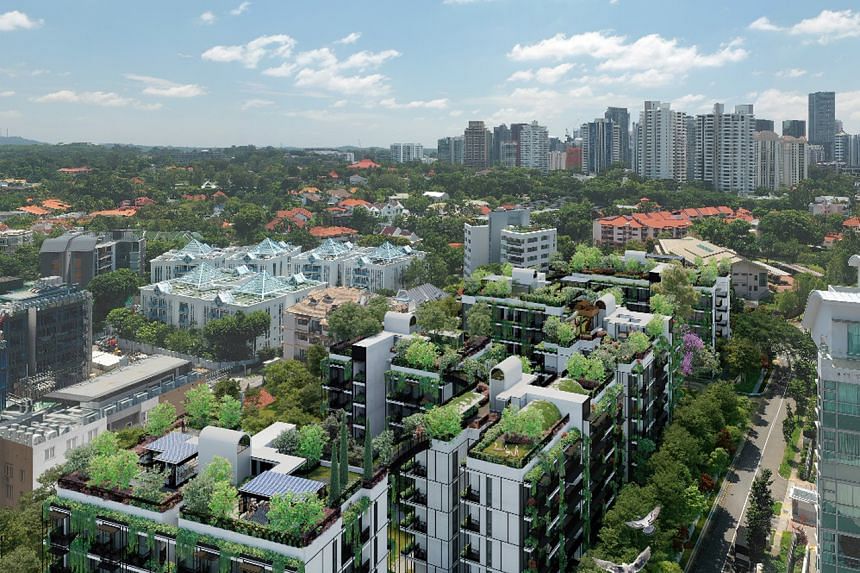 
SINGAPORE - Kimen Group has sold 104 of the 105 units launched for sale at its Jervois Mansion condominium project, with Singaporeans making up the majority of buyers.

Twenty-five of the 130 units in the freehold project in Jervois Close in the River Valley area have been retained by the niche property developer for long-term investment.

Located in prime District 10, the project is a redevelopment of Jervois Mansions, which the late Mr Aw Kim Chen, founder of Kimen Group, built more than 38 years ago. Previously, the 93,183 sq ft site housed three good class bungalows (GCBs), which he bought one after another in 1980.

The new Jervois Mansion comprises 70 one- and two-bedroom units and 60 three- to five-bedroom types spread over six blocks. Due to its proximity to the Bishopsgate-Chatsworth GCB area, the project is low-rise, with each block only five storeys high.

Twenty-nine units were taken up during a special preview a fortnight ago. By its official launch on Saturday (Oct 16), 103 units had been sold, with only one five-bedroom apartment available on Sunday evening.

On Jervois Mansion's quick take-up, Mr Ken Low, managing partner of SRI, one of three property agencies that were marketing the project, told EdgeProp.sg: "It signifies the strength of the high-end market, especially when it comes to a quality project in a prime location."

Jervois Mansion is the first private residential development in Singapore to be granted the Green Mark GoldPLUS Super Low Energy Residential Building rating, a new standard from the Building and Construction Authority.

Its roof pavilions will have solar panels that will power 30 per cent of the common facilities.

The rooftops of the six blocks will be connected by bridges, with a community urban farm and garden atop one block and a "Regenerative Woods", a nature plot left untouched to flourish naturally, on another.