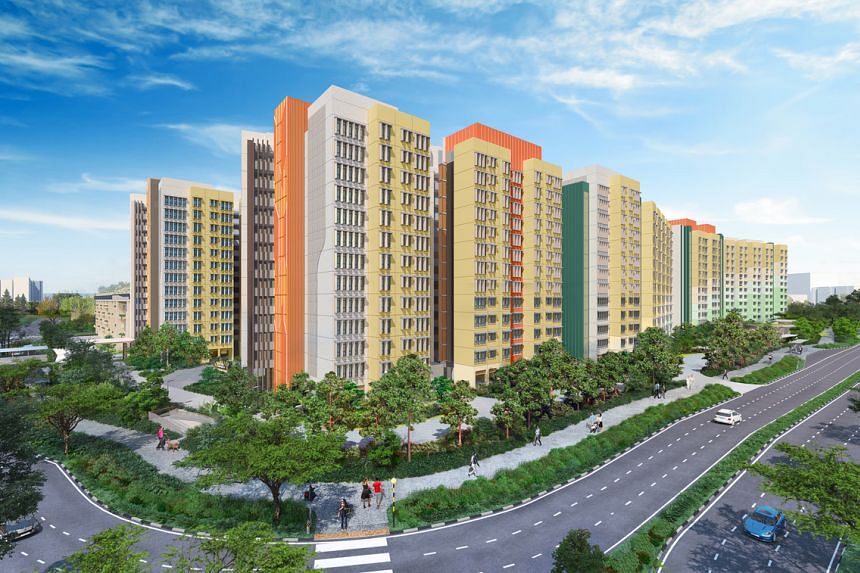 The 102 five-room flats in Hougang Citrine saw few applicants compared to the four-room units, although only one in more than six will get a unit.PHOTO: HDB

SINGAPORE - Bigger Build-To-Order (BTO) flats in the non-mature estates of Hougang and Jurong East were more oversubscribed than those in mature estates in the Housing Board's third sales exercise of the year.

Home seekers made a beeline for the four-room flats in Hougang, which saw one of the largest number of applicants for a non-mature estate in recent years.

There were 459 such flats on offer across two projects - Hougang Citrine and Kovan Wellspring - which attracted 10,602 applicants as at 5pm on Tuesday (Aug 17).

This means only one in more than 17 first-time applicants will get a unit.

Second-time applicants face even bleaker prospects, with more than 55 vying for each available unit.

The 102 five-room flats in Hougang Citrine saw few applicants compared with the four-room units, although only one in more than six will get a unit.

In Jurong East, more than 11 first-time applicants will compete for each of the 240 four-room units.

In comparison, competition is less stiff in the mature estates of Kallang/Whampoa, Queenstown and Tampines.

At Towner Residences in Kallang/Whampoa, more than five first-time applicants will be vying for each of the 226 four-room flats, the largest flat type available in the project.

At Queen's Arc in Queenstown, close to five first-time applicants will be competing for each of the 534 four-room flats, despite the project having the longest wait time of more than five years.

Tampines drew comparatively fewer applicants, with more than two first-time applicants vying for each of the 881 five-room flats on offer at Tampines GreenQuartz and Tampines GreenJade.

More than half of the flats launched this round are located in mature estates.

Kovan Wellspring, which sits next to Kovan MRT station on the North-East Line, is particularly attractive as it is competitively priced compared with a private condominium.

For instance, resale units at the nearby condominium Stars of Kovan average around $1,650 per square foot (psf), which translates to $1.5 million to $1.7 million for a 1,000 sq ft unit, said Ms Sun.

The other project, Hougang Citrine, is located within 1 km of the Paya Lebar Methodist Girls' School and 2 km from Maris Stella High School, which makes it popular among parents with young children, noted Ms Sun.

In addition, buyers have the shortest wait for these flats - around three years - as the project is slated for completion in the first quarter of 2025.

As at 5pm, all seven BTO projects in five estates were oversubscribed. The sales exercise will conclude at 11.59pm on Tuesday.

In November, 4,400 flats will be offered in towns such as Choa Chu Kang, Hougang, Jurong West, Kallang/Whampoa and Tengah.

Another 2,000 to 3,000 flats will be offered in towns such as Geylang, Tengah and Yishun in February next year.