Who can afford to pay $138 million for this Marina Bay super penthouse? 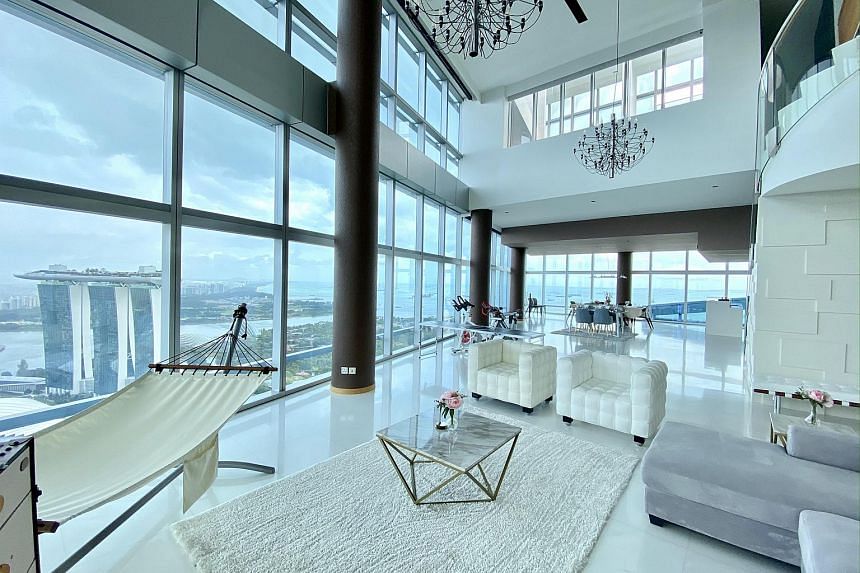 A collection of five penthouses were put up for sale recently at Marina Bay Residences.
PHOTO: TRISTAR PROPERTIES


SINGAPORE - A panoramic view of the iconic Marina Bay Sands and the Central Business District could well be the most pricey amenity in Singapore real estate.

A collection of five penthouses, put up for sale recently at Marina Bay Residences with an indicative price of $138 million, will give a sense of how much a buyer would pay for this sought-after view.

The maintenance fees and sinking fund for the five properties add up to about $20,000 every quarter. A foreign buyer would also have to pay an additional buyer's stamp duty of $27.6 million.


The indicative price tag of $138 million works out to about $4,884 per sq ft (psf), which is more than double the overall median psf of the four main residential projects in the Marina Bay area.

According to research by ERA, the median transacted price in the first six weeks of this year for Marina Bay Residences was only $2,109 psf. "How is that a 'good investment'," asked Mr Nicholas Mak, ERA Realty's head of research and consultancy, referring to the five penthouses.

The collective sale attempt has generated much chatter in the market on who would pay for the trophy assets that are already 15 years into their 99-year lease.

It also comes after the 21,108 sq ft super penthouse at Wallich Residence owned by billionaire inventor James Dyson was sold at a loss of more than $11 million last year.

Mr Edwin Yip, exclusive marketing agent for the collective sale, is confident that the properties would appeal to ultra-high-net-worth foreigners who are often on the lookout for such rare buys.

What makes the five penthouses unique is how they can be combined through internal modifications into one super penthouse, Mr Yip, associate director of Tristar Properties, told The Sunday Times.

If approvals are obtained, the five penthouses could become a "villa in the sky" spanning 28,258 sq ft from the 50th to 54th floors, with 24 bedrooms and a rooftop viewing deck, he said.

Although the five units are marketed as a collective sale, Tristar is open to selling them separately - but this has to be done from the units on the lower floors. "This way, we can support a potential buyer's requirements of fewer than five units without impacting our ability to interconnect the upper-floor penthouses," said Mr Yip.

Based on transaction data, there are only 11 known super penthouses with a size of 10,000 sq ft or more in Singapore. There are also no such super penthouses in luxury projects that are currently under construction, said Ms Han Huan Mei, research director of List Sotheby's International Realty.

In the last decade, there were eight transactions lodged for super penthouses. Only the one in Wallich Residence is known to have changed hands twice in less than two years, said Ms Han.

Market observers said the sale went through despite the huge loss because it would not be easy to find someone willing to pay $62 million for a penthouse.

"The super penthouses are really a small sub-class of the prime housing market. It's already difficult to find someone to buy a $20 million penthouse. It would be even more challenging to sell the five penthouses collectively," said Mr Mak.

"But these buyers, being used to the very best and ultra-exclusive, are also very selective. There are not many properties in Singapore that tick the boxes of these ultra-rich clients' refined needs and wants, especially if a good class bungalow is not an option."

Ms Teo said super penthouses are like a separate asset class, and their value is hard to ascertain due to the lack of comparables.

The report also cited travel restrictions that prevented potential foreign buyers from physically viewing properties in Singapore as a reason for the overall 20.4 per cent decline in sales of luxury homes, compared with 2019.

Mr Mak said the luxury condominium sector is not out of the woods yet, even though prices in the core central region (CCR) grew by 3.2 per cent in the fourth quarter of last year.

Mr Mak also noted that from 2018 to last year, the overall median transacted price of the four main residential developments in the Marina Bay area declined from $2,459 psf to $2,296 psf.

He expects the median transacted price in the area to be around $2,300 in the short term, "assuming that the pandemic will gradually come under control" without major second or third waves in Singapore, and "no new property cooling measures or other shocks to the economy and property market".