Bidadari means "fairy" in Malay, which was in turn derived from the Sanskrit word vidhya dhari, which means a nymph of India's heaven. The cemetery took the name after the sultan's wife ceased to reside there. The grounds were leased to a Japanese person who built moats with typical Japanese wooden bridges and a teahouse.

Bidadari Cemetery is no longer in use, and most or all of the graves have been eventually exhumed between 2001 and 2004 for redevelopment in the land-scarce city-state. It was re-opened as a temporary park in 2006. In late 2011, the Ministry of National Development (MND), came up with the blueprint to develop the area into a housing estate with HDB flats and private housing

Envisioned to be a "Community in a Garden", the Bidadari estate will have features such as a new 10-hectare Bidadari Park and a greenbelt which passes through the estate from Bartley Road to Upper Serangoon Road. Bidadari estate comprises four districts: Alkaff, Woodleigh, Park Edge and Bartley Heights spanning 93 hectares of land.

Most BTOs in the Bidadari estate enjoy greenery view and some can even enjoy the breathtaking view of Singapore city skyline. In addition, Bidadari BTO projects have provided ample social amenities and space for residents to rest, relax, and connect with friends and families.

View nearby Woodleigh Glen/Village units for Sale or Rent
Locations 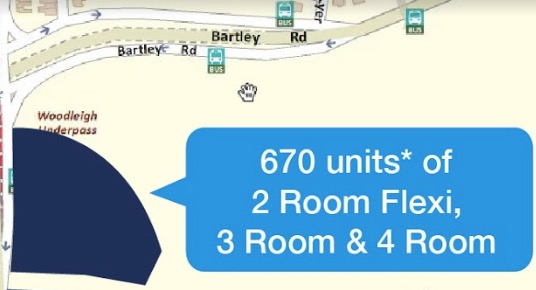 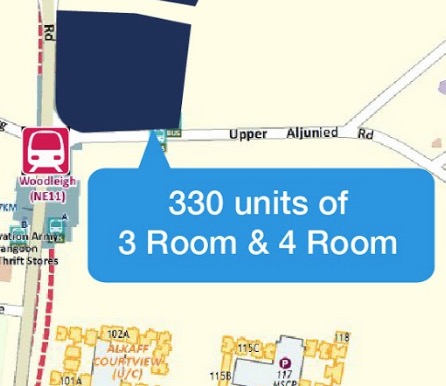 Use two fingers to move the map

Based on HDB's launch prices, the table below compares affordability across the upcoming BTO launches.

Legend: Red means that income level may not be able to qualify for a mortgage per MAS 30% MSR Rule

The figures show you an estimate of the extra monthly cash instalments you have to fork out after CPF deduction. These estimates take into account the prevailing CPF OA contributions, Enhanced CPF Housing Grant (EHG) and loan interest rate.

Depending on your household income, a cash payment highlighted in red means that it may not be affordable for you to purchase that BTO.

1. Buyers have sufficient savings for the 10% downpayment.

2. The monthly installment is based on the maximum tenure of 25 years at HDB concessionary interest rate of 2.6% p.a.

3. Buyers apply as a first-timer household under one of the eligibility schemes, and all buyers are Singapore citizens.

4. Buyers fulfil all eligibility criteria e.g. within income ceiling for flat intended, at least 21 years old, do not own other property overseas or locally.

Disclaimer: Calculations provided above for financing are for general reference only. StreetSine Singapore Pte Ltd accepts no liability whatsoever arising from any use of or reliance on the use of these tables.

To go BTO or Resale?
Decision Matrix:
Generally, higher monthly cash payment is needed for HDB resale compared to BTO. However, it may not always be the case depending on the prices of the resale flats compared with the BTO launch.
Woodleigh Glen/Village BTO price vs Toa Payoh HDB resale prices

Disclaimer: Calculations provided above are for general reference only. StreetSine Singapore Pte Ltd accepts no liability whatsoever arising from any use of or reliance on the use of these tables.
* Assumes first-timer Singaporean couple living near one of the parents. Refer to HDB's Housing Grant rules if your situation differs.
* Updated based on 2023 Budget wef 20 Feb 2017

Can I Afford This Property?
Personalize this calculator. Find out your monthly mortgage payments and minimum household income required under the TDSR (Total Debt Servicing Ratio) and MSR (Mortgage Service Ratio) requirements.